After nearly two months in my mother’s place, my travel batteries were more or less fully recharged. I was itching to get going again and looking forward to the adventures ahead. Yuily had to leave the Schengen Area on June 2, so we set off on May 20 with the aim to cycle through the Netherlands on the way to the UK.

Through the border maze

It was one of the worst springs I can remember in Germany, just a few days before we left we still had 10°C and rain. But luckily, the day we left it seemed to warm up for good. I had planned the route previously and aimed to make the best use of old train lines in the notoriously hilly Eifel range until we reached the flat ground of the Netherlands.

I was really happy with that decision, as around 30 km from my mother’s place we could reach the Mosel-Maare cycling trail in Wittlich, which took us up those hills with a minimum of effort. The trail was full of other cyclists now that spring was fully here. After a short gap, another rail trail, the Vennquerbahn, took us into Belgium.

Things got more fantastic as this trail was just finished last year, had less traffic on it and took us on basically flat gradients through the steep hills, as all the bridges and tunnels from the former railway were intact. This trail ended at a junction with yet another rail trail, the Vennbahn, which goes through one of the weirdest territorial anomalies out there. 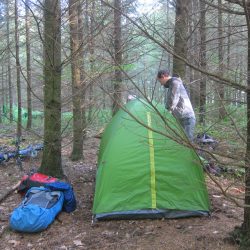 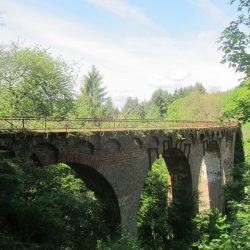 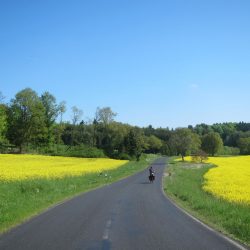 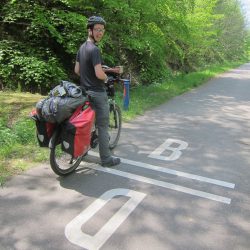 Built by the Germans in the 1800s, it became partly Belgian after World War I when Belgium annexed the western Eifel. When the border was drawn, it went through the railway multiple times, which would make travel on it very annoying with more than a dozen passport checks. To avoid this, the railway and around 3 meters of land to either side was made Belgian, creating multiple German exclaves in the process.

The railway is long gone and now a cycle track, and with the Schengen Agreement border checks are a thing of the past. But the border stayed, and so we were cycling in Belgium most of the time, but when we went off to the side to camp, we were in Germany. It was impossible to notice, we had to look on the map to confirm.

We finally entered Germany again for good near Aachen, but bypassed the city to go toward the Netherlands, not before visiting a Supermarket again to take advantage of cheap German groceries. After over 100 km of old railways, we were back to roads again, but not for long. I was looking forward to the Netherlands for a long time, and I hardly need to explain why. The cycling infrastructure is simply the best in the world.

The best country for cycling

Gone were the days of long research about cycling routes and choosing between a more direct, but more busy highway and a longer, but more quiet road. In the Netherlands, no matter which route or road we were on, we could always be assured there would be a wide, separate cycling path. On smaller roads, there were two lanes for bikes and just one for cars. The way those cycling paths navigated through intersections was always easy to see. Unlike other countries, the cycling path never inexplicably ended and dumped us on the road – there was always a clear indication where to continue. We absolutely loved cycling here, and obviously so did many locals. 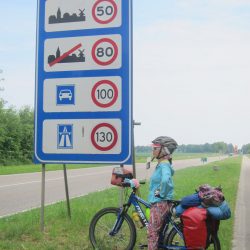 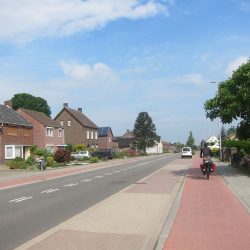 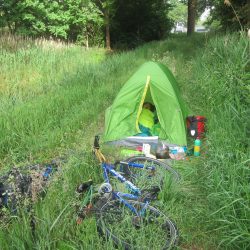 Camping in a small forest 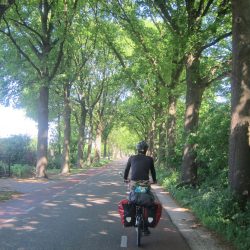 I arranged to stay with a friend of mine in the town of Tiel. We had been camping for five nights so far and the thought of a shower and a bed after that was fantastic. Mitch and his parents welcomed us and treated us really well during a rest day, making sure we’re fed and even leaving Yuily with a handmade dress.

The flatness of the country saw us cruise to Amsterdam within a day, packing in some sightseeing in Utrecht. We had temperatures above 30°C for a few days, unusually hot. In Amsterdam we had a stay organized through warmshowers with Tello, a student who was about to leave on a trip very similar to ours in reverse. He gladly lent Yuily his museum card so she was able to enter the Van Gogh museum for free, which made her happy as Van Gogh is one of her favourite painters. In the meantime, I enjoyed sharing plenty of experience with Tello for his adventure ahead. 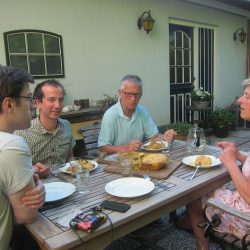 Mitch and his parents 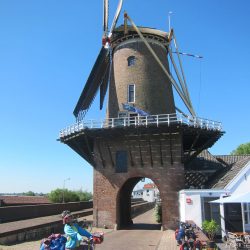 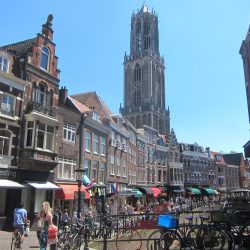 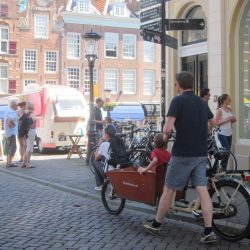 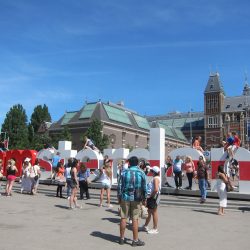 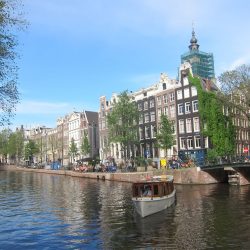 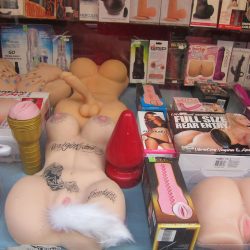 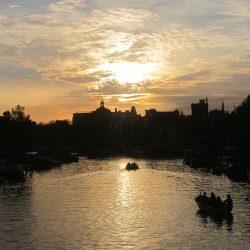 We had two choices to get to England from here. One was to follow the coast all the way south to Calais in France, the cheapest place to cross. It would be a bit of a rush. Another was to leisurely cycle to Rotterdam, stay with another friend for two nights, and take a slightly more expensive ferry from nearby Hook van Holland to Harwich. Considering our lazy nature, no surprise we took the second option. 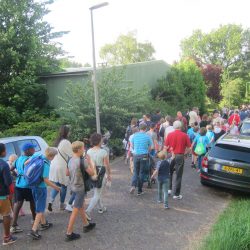 It was a school excursion day 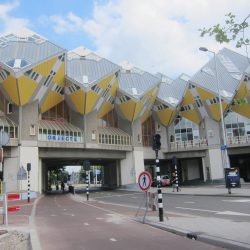 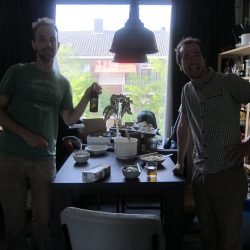 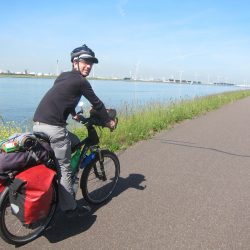 Cycling to the ferry

The Netherlands were a fantastic place to be. Not only did we take cycling paths for granted, we were also blessed with fantastic weather most of the time. We were wondering if we’ll hate England instantly for its lack of those, but considering it was day 89 of Yuily’s 90 days in the Schengen Area, there wasn’t much of a choice. So, starting from now, we had to spend at least 90 days in the United Kingdom and Ireland. There was one thing we looked forward to though: For the first time, we both wouldn’t have a language barrier.