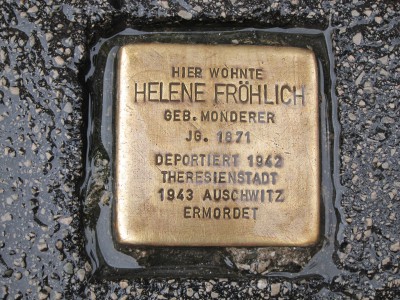 Difficult to find, on German streets you can find gold-colored tiles like this. Some of them in residential areas, some in the front of a shop, some in front of a seemingly new building.

We didn’t really notice them until our Couchsurfing host in Berlin told us to watch out for them. Each tile represents a persons life prosecuted in World War 2, mostly Jews but also other groups such as political opponents, disabled people and homosexuals.

After hearing about it, the next time we took a walk through a city, we suddenly saw them everywhere. We wondered, how did we not notice them before? Were we blind or something?

On each tile you see the persons name, when they were born, what happened to them and their ultimate fate, which is ‘Ermordet’ (murdered) or an escape most of the time.

A golden tile for a human life. It made us realize that at this very building there was living someone who suddenly had to fear for his life every day, tried to escape, but ultimately died in the Auschwitz concentration camp. 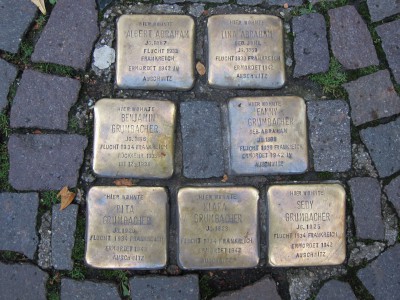 The largest amount we saw in one place was seven. All of them have similar names, so likely a big family, and a similar fate. They all tried to flee to France in 1938 but were then found and finally killed in Auschwitz except the father, who died earlier.

We are honestly very impressed by Germany’s move to represent each life with a golden tile. It sure is to raise the awareness of the past that such a thing should never happen again, but it’s also a very anti-nationalist move.

Unlike the Japanese, who have always denied some facts about World War 2, the Germans deeply look into their own past during their education and make themselves aware of the horror they caused, so that it never happens again. 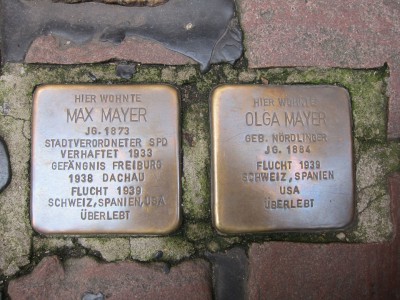 We wondered, why could so many ordinary be so blind to a massacre of that scale? Why were they so indifferent towards it?

But then we realized that these terrible decisions came from a small number of leaders. The general public was mostly not aware. Sure, they might have noticed that their neighbor just disappeared, but they didn’t know anything about where they went, had no idea about extermination camps or anything on the bigger scale. Just as in many totalitarian countries, people did not have freedom of speech while the government will only feed you with their news. If you didn’t accept it, it was treason.

We all know the subsequent development, the leaders that were still alive and responsible got arrested and sentenced, but what was left over was still a damage in history that all German people had to bear. They will carry this sin with them at all times as it will be one of the darkest stains on human history.

Although the younger generations in Germany don’t have any living ancestors who are responsible for anything in World War 2 anymore, the courage to admit such things constantly reminds them of avoiding to repeat this mistake. This might be one of the reasons why Germany is one of the most welcoming countries for refugees in recent news, to reverse the old historical impression.

You can find these golden tiles everywhere in Germany and Austria, and also some countries which were occupied by Nazi Germany, such as the Czech Republic. Have an eye out for them when you travel to these countries!