Our final stretch home was pretty, but not without complications. And with a lot of experiences richer.

Got no time to read everything? Just watch the video!

Day 20: Relaxing in the tropics

Sadly, during the night, someone stole my power bank, including charger and adapter. I put it on an outlet in the school hallway and already thought this location is risky because easily visible. Now I know it was… 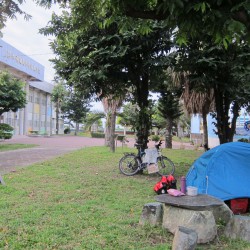 Our campsite – did not need to be sheltered this time! 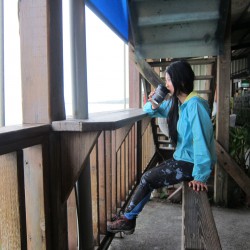 Due to our excellent work yesterday, we only had 35 km to go to Donggang, from where we could catch a ferry to Liuqiu island. The weather was excellent again and we made good progress. There was a huge amount of traffic heading south and at one point Yuily had to wait about 20 minutes to cross the road! Fortunately much less traffic headed north where we were going, and we had a shoulder to cycle on.

We got to Donggang with time to spare and waited for Yuilys brother Zola to arrive. There were a lot of people, but less than I anticipated. We paid NT$400 for return tickets plus NT$50 for the bikes as we hopped on the 20 minute ride.

Once arrived on the beautiful coral island we had another 3 km to go to Yuilys uncles place, did some much needed laundry and had a shower. After a family dinner we were already enjoying our time off here.

Rest we did. There are plenty of attractions to see on the island, of which we only went to vase rock. A reason was that we have seen them all on a trip here two years ago already.

We enjoyed and indulged in the generous home-cooked meals which were especially delicious thanks to Yuilys uncle being a sausage maker. 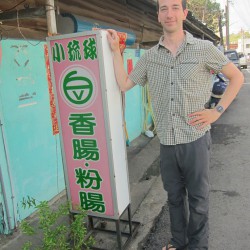 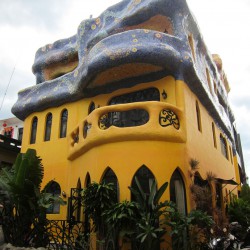 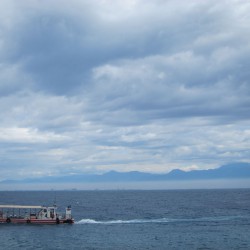 Taiwan’s mountains in the distance 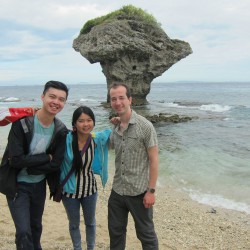 We were only planning to go to nearby Kaohsiung, so there was absolutely no rush as we took the 4:30 pm ferry off the island. There was a huge line in front of the boat and it looked like we would have to wait for a later one, but thanks to our bicycles we were able to skip the line. We just had to say goodbye to Zola right there as he had to wait due to his lack of bicycle.

We cycled through the industrial areas towards Kaohsiung during the sunset, arriving just after dark at the house of the parents of a very good friend, where more home-cooked goodness awaited us. Just after we arrived, it started pouring and continued for most of the night.

Day 23: Hospitality at its best

On to another friends place in the nearby city of Tainan, we chose to go on highway 1 from the many route options. It was the busiest, but also shortest and simplest way, and, most importantly, had a generous lane for motorcycles and bicycles.

We made slow-ish progress due to numerous traffic lights, many of which we ran over – some of them are REALLY pointless, guarding the huge boulevard from farming tracks or factory driveways. Imagine even the tiniest road intersecting a large highway, the Taiwanese would put a traffic light there. It was also an unusually hot day, reaching 30°C with full humidity, making us sweat quite a bit. But still, when we could pedal on, our average was around 23 km/h. It seems like we improved heaps since the beginning, when Yuilys average was a mere 12 km/h. Sometimes I had to change into the big chainring to keep up with her! 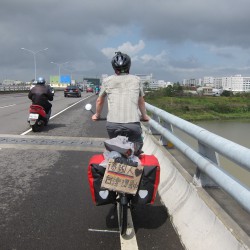 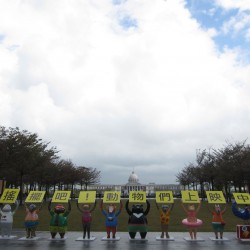 Our hosts had cooked a huge batch of curry earlier and left us some of it, which we happily devoured. It was an enjoyable evening with fellow beer lovers.

Since it was Yuilys birthday and we were in great company, we decided to stay an extra day. We rode around the city, exploring old buildings and me treating her a nice dinner.

When we returned, our friends had a surprise for her in form of a birthday cake. How nice!

We were still in no rush to leave, and when we finally did it was past 11 already. A nice day kept us at good speeds through the farmlands, which looked nice, but all too similar as we kept speeding along.

After lunch we noticed the wind slowly turning against us. This is what I had expected for the whole west of Taiwan and we were really lucky that we had little wind, even a slight tailwind the past few days. These days were over now, and we became a lot slower. 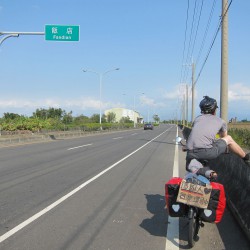 It’s more comfortable than it looks 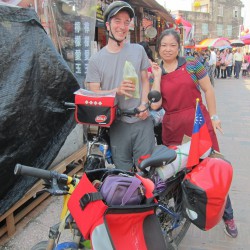 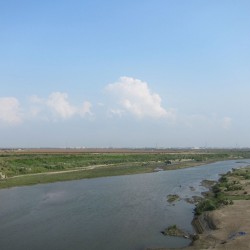 At one point I had real trouble following Yuily, and when I looked down it turned out my rear tire was flat. No wonder! I changed the tube and it later turned out that the patch I applied all the way back in Nanshan came loose – so not even a puncture, just my sloppy handwork from weeks back…

We pushed on through the headwind to reach Xingang. We realized on the way that camping in schools would not be a good option anymore since school would restart the next day! So, a more wild option was necessary. We scouted the local town park for options and nicely enough it had a stage with three walls and a shelter, close to the public toilet. 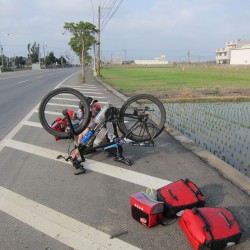 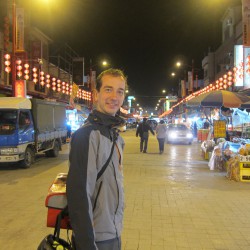 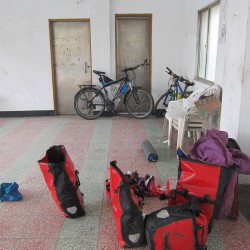 We awoke in the early morning to people cleaning the stage to do some exercise. They didn’t seem to mind our tent one bit, in fact they seemed to completely ignore it, as if it wasn’t there. Back to sleep.

When we woke up again there were some other people relaxing and reading newspapers, again mostly ignoring us as we packed up our tent. It was a good bit colder than the day before and it would remain that way, along with our old friend, the headwind.

We were about 90 km away from Taichung on the shortest route, so theoretically we could make it in one day. But with the headwind and an unusually lazy day for Yuily, I knew it was not going to happen. We passed an old town with, strangely, a lot of comic characters painted on its walls and went for some sightseeing. 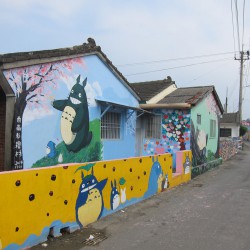 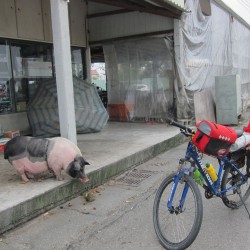 As we struggled to make 20 km by afternoon, I was thinking we might even need three days to Taichung. But as another touring cyclist passed us, he gave us a motivational boost as we tried to keep up with him. Also, this part of Taiwan was a lot more urbanized, so the buildings shielding us from the wind helped a lot.

As we passed 50 km by 4 pm, I was confident enough to make it to Changhua, where a friend could host us. And so we did, rolling into the city as it got dark. Yuily tried hard to find a specific meatball shop, only to find it closed, after which we joined our friend for dinner. 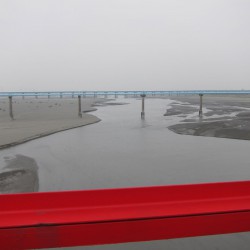 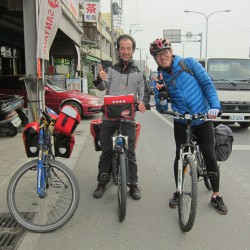 Knowing we only had a short stint left to Taichung, we took our time. Yuily badly wanted to visit the town of Lukang where she tasted delicious baked cookies in her childhood. It was in the opposite direction of Taichung and would make us pass very close to our friends house again anyway, so we opted to take a motorcycle for the round trip.

Lukang turned out to be a more touristy and less authentic version of Taiwanese old towns. The ones we saw on the road the day before were nicer. Yuily found her cookies and we quickly left back again to Changhua.

Around 3 pm we set off for the last leg. I plotted a route that would take us on a bicycle trail that ends close to Yuilys home and avoids the city. It was ok cycling with grey weather but no rain. We arrived just before dark and congratulated us on a job well done. We finished a tour around Taiwan and a look at my odometer came with a nice surprise as the numbers were 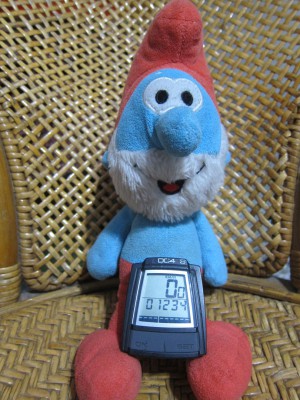 1234 km. We certainly took a long way around, as there are some who make it around in less than 900 km. But racing around was never our goal as our clock of 27 days proves anyway. That was a little bit longer than I expected, but within margin. 2 punctures for me with one for Yuily is also reasonable.

What was not within margin: How tough it was, especially in the first half! Everyone before has said that touring around Taiwan is easy and we shouldn’t have any trouble. Well, Taiwan has made it hard for us, battling the elements of heavy rain, freezing temperatures, snow (!), landslides, extreme moisture and wind. At times it was very testing.

What I also didn’t really expect is how different it is from other methods of traveling. I expected it to be close to backpacking, but it’s totally not comparable at all. Visiting places becomes secondary, the primary objective is always to cover the kilometers you need to do that day. We were also in fights much more often. People say traveling together tests your relationship, and so far we had no problems. That is, until we tried cycle touring – it can be the ultimate test for a relationship!

We are proud that we pulled it off and now feel more confident of doing longer tours. Taiwan throwing the elements at us had the positive effect of showing us where our and our gears limits are, so we know pretty well now that a temperature below 5° C plus rain is too cold for us to cycle in, know that steep mountain passes are doable for us, know that our tent is big enough, know that we need less clothes and the best waterproof gear. Thank you Taiwan I suppose?

But really, thank you Taiwan for the amazing warmth of its people. It might have spoiled us a little, but we never had trouble to find a place to camp and friends were so generous to us it’s really hard to repay. We absolutely appreciated and loved the times random people talked to us and insisted on buying something for us – this is what makes cycle touring here a pleasure.