A rather small country completed the trio of countries in East Africa for which our visa was valid. But this little country has much to offer. Known for the extremely brutal genocide of 1994, fewer people know what huge progress the country has made since then. It is today considered one of the safest, cleanest and most corruption-free countries in Africa.

The border crossing went smoothly. We had nine days left on our visa and I had researched that a five day overstay would be without consequences. So, 14 days in total. After the border we had to change the side of the road. There was no sign and nothing pointed it out, if I had not known that Rwanda drives on the right, we would have crashed head-on into the next car!

After a short break near the border, the begging continued quickly. “Mzungu, give me money!” was also often the only English what the people knew. Unlike most African countries, Rwanda was a kingdom in which one language was spoken before the colonial era: Kinyarwanda. Although English, French and Swahili are also official languages, they are only used by a small number of Rwandans because, unlike in Kenya and Uganda, no lingua franca is needed.

A few miles beyond the border, I saw a boy throw rocks at us. I stopped immediately, and the boy and his friends immediately escaped to the bushes. I followed them until I met a farmer and explained in sign language what happened. As with our Ugandan incident just before, we hope adults will discipline their children better. Shouting “Give Me Money” and throwing stones is not how you want to be treated as a tourist.

The shouts for money finally disappeared as we approached the town of Ruhengeri. We saw many modern houses and schools, the streets were spotless with clean pavements. When we wanted to cross the street, the cars even stopped for us! That’s how I like Rwanda.

Our hostess Esther greeted us warmly. She is married to an American who is registered on warmshowers, but is often on business trips to other African countries. Here I had also ordered a new credit card, unfortunately, this never arrived. Waiting the rest of the week did not help, and we had to keep cycling without the card, so as not to overstay our visa too much. Esther offered to send the letter to Tanzania by bus if it arrives, which was very nice of her. 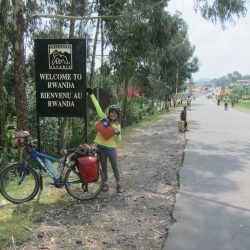 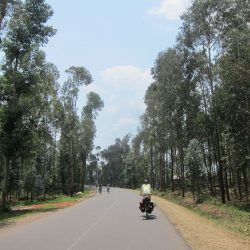 Driving on the right 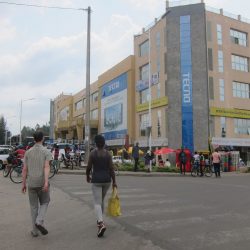 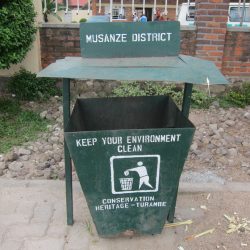 I also caught my first diarrhea in Africa. My own fault, because I ate a moldy donut. It bothered me for a few days and made me crawl up the mountains on Lake Kivu very slowly. Unfortunately, the lake was often shrouded in fog, but the road was still beautiful and well developed, going along the mountains that separate Congo and Nile.

Rwanda off the beaten track is a challenge for introverts like us. The population density is very high and privacy is an unknown concept. Whenever we stopped, within minutes we were surrounded by people, mostly children, who just stared at us. They stopped whatever they were doing, came to us and gawked at us with half-open mouths. 30 minutes until it became too much for us and we cycled on. Some children then ran after us for several kilometers until they gave up, panting and wheezing. Many also begged during all this.

Once we had to camp because of lack of accommodation at a church without fencing. We could not retire to the tent because within minutes it was surrounded by gawkers who were shining around with flashlights and making comments about us. After I shooed them away, they came back within ten minutes. When they finally left, we were called out again a total of four times, allegedly because of our safety. Early in the morning we were awakened by farmers talking near our tent, one of them had said “give me money” in passing. We quickly packed our things and set off …

Unless it’s not obvious from this description, we felt like animals in the zoo or aliens. Someone with a white skin color is apparently not regarded by many Rwandans as an equal person, but as a strange being (or as an ATM). We have tried several times to talk to these gawkers and explain to them that we feel unwell to be stared at, but were never taken seriously. However, if a decent Rwandan was around and sent those people away, he was respected. So for most of them we were just weird creatures that they do not have to take seriously. I think there is an educational gap here. In most schools around the world it is stated several times that there are people of different skin colors, but we are all homo sapiens and we have to love and respect each other. This just does not seem to be the case in Rwanda. The number of fair-skinned foreigners is not really lower here than in Kenya, but nevertheless one is treated there with equality and respect. Probably because of the education? Only my personal theory … 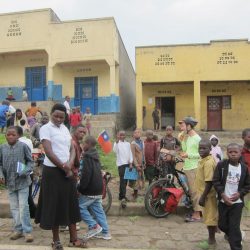 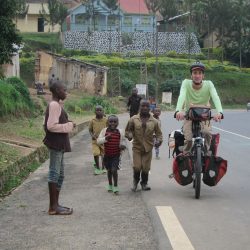 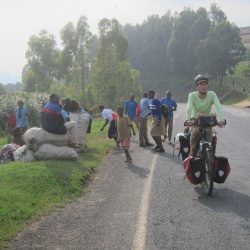 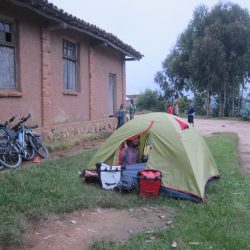 Camp next to church

Enough of the complaints, apart from that, the biking was great. Although we had to cycle up to 2400 m several times, the roads were never too steep and very well paved. There is even a bike path along the same axis, the “Congo Nile Trail”, but mainly on unpaved roads. Since there was hardly any traffic on the paved road anyway, I did not see the necessity – but worth a consideration for hard-core bikepackers.

On the way to Kigali we saw a great waterfall and had always fantastic views of the terraced mountains. Again and again we had pleasant encounters with friendly Rwandan cyclists, of which there were many. They either worked as bicycle taxis or transport impossibly heavy loads – our bikes were really light in comparison! One of them, Patrick, even helped us to get rid of the annoying kids. Great guy! 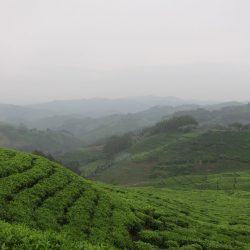 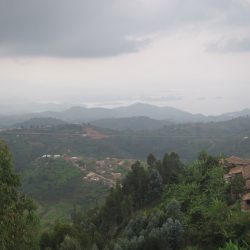 Lake Kivu from the mountain 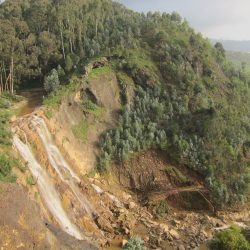 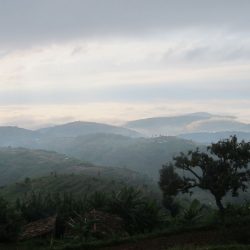 The constant attention finally died down shortly before Kigali and we went over the steep hills of the city in time for lunch in the Japanese restaurant Kiseki for Yuily’s birthday. This restaurant was founded by the world cyclist Mio and was recommended to us. Mio welcomed us with open arms, organized a small cheer for Yuily and invited us to the buffet, which we have been looking forward to for days. We like African food, but a change was very welcome. Meanwhile, an Italian cyclist arrived, who himself was traveling from Cape Town to Cairo. We were able to exchange a lot of information with him.

We could have camped at the restaurant, too, but an American-Cameroonian couple already welcomed us via warmshowers. Sean and Fai were fantastic hosts and we enjoyed the next three nights of comfort with them as we visited the city and did errands. After Kigali, we had long stretches in Tanzania before us and did not know when we can enjoy a fully equipped kitchen again.

One thing we had to visit was the museum about the genocide. Rwanda had a class system for quite some time: farmers and workers were called Hutu, landowners and civil servants called Tutsi. When the Belgian colonial government issued identity cards with this class on it, social migration between these classes was no longer possible. Bigotry in the media and individual massacres became more and more common until, in April 1994, the media-controlled hate unloaded and Hutu extremists called for the murder of all Tutsi. Neighbors and friends became mortal enemies overnight.

The resulting chaos has made it easy for the rebel Paul Kagame to conquer the country within a few months. He put an end to the murders immediately and governs until today. However, in these few months, approx. 800,000 Tutsi and moderate Hutu were killed. Kagame is an often-cited example of a good dictator: he worked up the genocide without resorting to revenge. He modernized the country into one of the cleanest, safest and most organized countries in Africa. And above all, he completely removed the Hutu-Tutsi differentiation, today people just call themselves Rwandans.

Nevertheless, after the museum visit, the sheer brutality of the genocide made me think. There was no central organization behind this genocide, the government had completely lost control, so the killings came from social pressure. Even in Nazi Germany, the government kept the extermination camps secret, but here, the same thing happened openly on the street without anybody being able to stop it. I realized the tremendous power and responsibility of the media – that alone can trigger such terrible events. 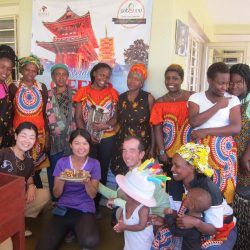 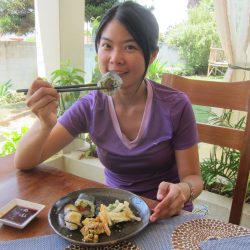 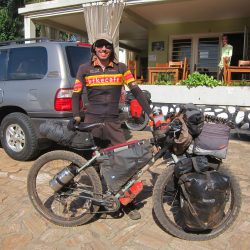 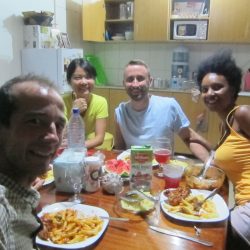 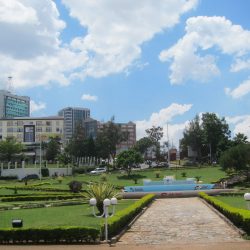 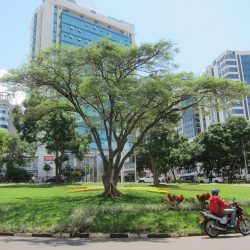 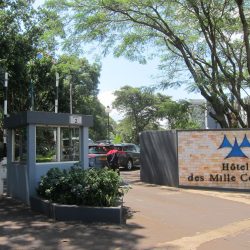 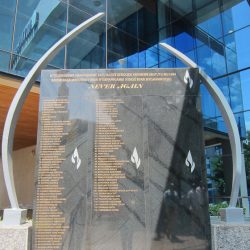 We finally cycled to the east of the country to the border with Tanzania. The hills flattened out a bit, so the landscape was a little less impressive. Nevertheless, cycling was more fun here, as people were a lot friendlier than in the West. We would still be stared at like zoo animals, but hardly anyone begged or made fun of us. On the first evening we could camp at an art gallery, on the second we found a guest house for 10 €, which even had Wi-Fi. So we left Rwanda with a good last impression. 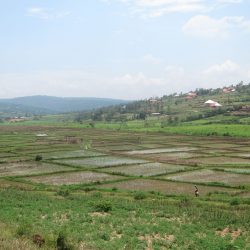 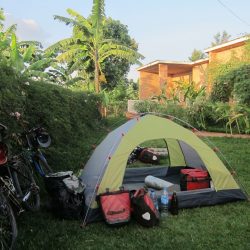 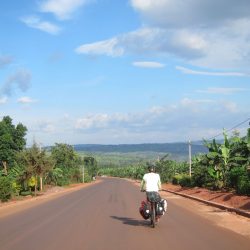 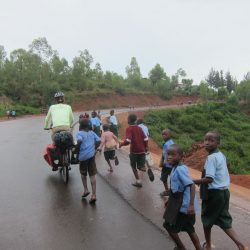 Rwanda is certainly a very interesting country. I can recommend a visit here despite the zoo animal feeling – there are clean streets, beautiful houses and the modern and safe Kigali, so many stereotypes of Africa will go to die here. Here you will find beautiful mountains and lakes and there is much to see. For tours or safaris, however, you should have deep pockets, these are more expensive than in neighboring countries!