Another country that raised concern on the way due to recent events: Turkey. But like so many countries making the headlines, there was little actual concern for us cycle tourists. Instead, this country still had so much to offer for us.

Pictures by Yuily, text by Stephan.

I probably make the headline sound dramatic, but the southeast border areas of Turkey, that we were dropped right into after crossing from Bazargan, Iran, are a problem. While Kurds have been absolutely lovely in Iran, in Turkey they are partly in open rebellion against the government, by which they are suppressed a lot. A few of these rebels are dangerous bandits: a week earlier, our friend Pierre narrowly escaped a robbery on the highway.

Together with the fact that winter in central Turkey was in full swing already, with nighttime temperatures well below -10°C, making camping downright impossible, we opted to cheat straight away and only cycle 30 km to Dogubeyazit and take a bus from there to Trabzon on the Black Sea. But first we had to get there and find a place to stay.

After an uncomplicated border crossing, we were out on a wide, empty road. There was one benefit of being here: Mount Ararat. It was a majestic sight and we were in luck as we could see the 5600 m high peak and had the mountain constantly on our right.

The local banditry had us on our toes though, passing people and cars on the road with distance, keeping our stops to a minimum. This was no joking matter, as a heavily armed Jandarm vehicle stopped us. After establishing that we are tourists, everything was ok and they invited us for tea. It was still awkward as the turret on the vehicle turned and pointed at us. 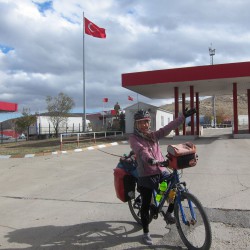 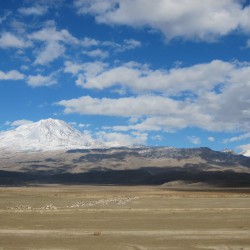 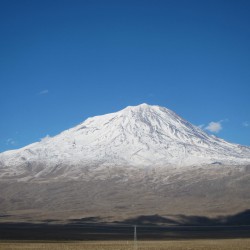 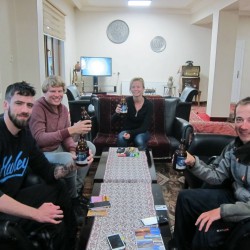 Thanks for the beer!

We made it into Dogubeyazit and set to search a place to stay. Some teenagers helped us to find a cheap hotel, but we were keen on trying to find somewhere free. The whole place was really dodgy and begging kids were everywhere, which I may have told “Fuck off!” a little too harshly. We tried to ask schools, mosques and the police, but we were either ignored, ushered out or shown to a hotel. Just 30 km from Iran, where multiple people would’ve invited us home already, people were so cold and inhospitable. Bizarre.

Eventually we gave up and bargained down a hotel to TL60. There goes our record of not paying for accommodation. We met three Australians here on their way to Iran, who we swapped SIM cards with and who invited me to my first beer in 3 months, which made me a very happy man.

The next afternoon we found a bus to Trabzon. It was, as most buses in Turkey, huge and fitted our bicycles easily at no extra cost. We were happy to be out of the war zone and I was looking forward to the …

Trabzon was really the start of Turkey for us and it was an immediate culture shock compared to Iran. There was an old town, a pedestrian district, narrow streets, outdoor cafes… It was Europe, as far as I could see! We rested up for a few days thanks to our host Mehmet, ready to hit the road westward.

Turkey gets a lot of praise from cycle tourists for multiple reasons: Excellent roads with good, wide shoulders, friendly people, convenient resources at supermarkets and gas stations, great scenery and totally unproblematic camping. All of this was very true for me as we breezed along on the mostly flat coastal highway, fueled by local bread, camping at the beach, forest, or in a gas station (very common and convenient).

This area is usually very rainy, but we were in luck as we had sunny weather the entire time. It was very, very humid though, so even though the nights were 6°C, it felt a lot colder than that and we had to deal with a tent covered in condensed water in the morning. 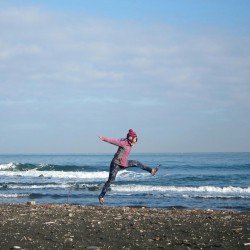 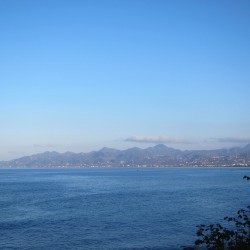 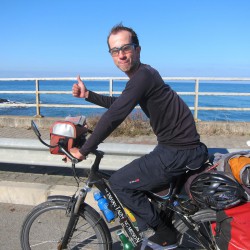 We covered the distance to the large city of Samsun in 5 days, which was a point where we would turn inland again. We chose to take a bus across the frozen plateau to arguably the greatest of Turkey’s attractions:

A night bus dropped us in the area, which is apparently so full of things to see that 4 days are just about enough. Prehistoric events left the area full of limestone structures, which people built houses and caves in. Many of those were transformed into hotels for the tourists that come to admire them.

And still I cannot believe how mind blowing this place is. The scenery in these valleys is out of this world, and by some kind of magic, it’s not even a tourist trap, as there are very little hawkers and scammers. Instead, we got genuine tea invitations and, in one case, a small donation for our trip.

We visited the Ugurup castle, the Rose Valley (stupidly with our bicycles), Pigeon Valley and Love Valley. We could’ve spent a week more on other things in the area. 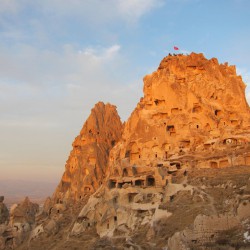 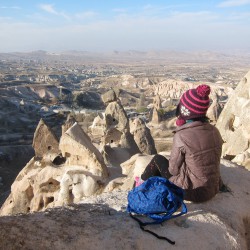 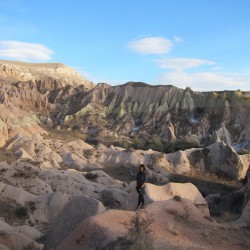 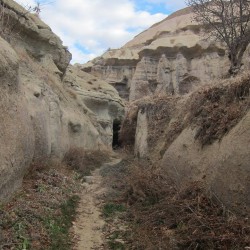 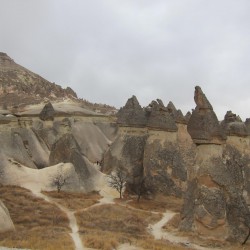 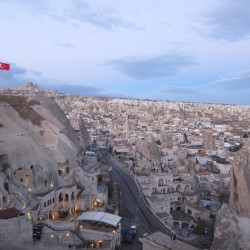 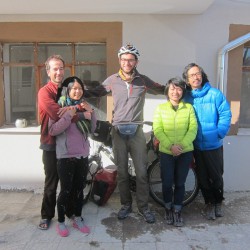 At our warmshowers host, we also met Pierre again, along with Carly and Ryan, Taiwanese cyclists we also met briefly in Iran. It was great to catch up, then we had to say goodbye again as their route differed from ours.

The next plan was to head straight south to the Mediterranean Sea. Unfortunately, winter fully arrived in the area now and covered Cappadocia in a layer of snow with temps of -2°C during the day. We decided to cheat yet again and take a bus to Mersin, where comfortable 20°C were still common. Even so, the 30 km to the bus station in Nevsehir were really testing us due to constant snow on the way… 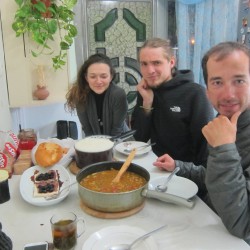 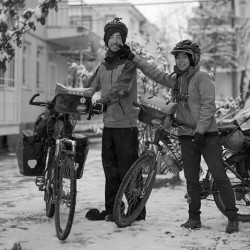 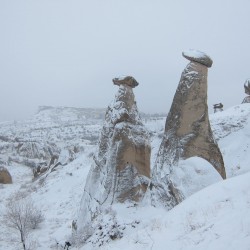 Cappadocia in the snow 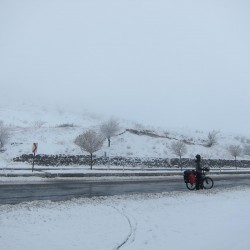 When I write of harsh winters in Turkey, many Europeans are probably confused. This is because the Mediterranean coast is what most people imagine when they think of Turkey, which is nearly tropical and warm enough for growing bananas in some places.

For us, this was perfect cycling weather now. Most of the resorts were closed and the highway quiet enough for some great cycling. And it was spectacular, really really beautiful, but also tough, as the road kept rising and falling on the cliffs. Some days, I even managed a swim in the crystal clear water in the afternoon.

It was a pity we had a schedule to keep up as Yuily only had a 30 day visa. Like this, we managed to catch up with Andy and Clare, whose blog I’ve been following since a while. Winter managed to catch up also, as temperatures dipped in these two weeks and overnight frost became a threat. 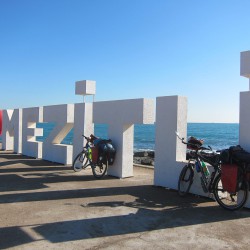 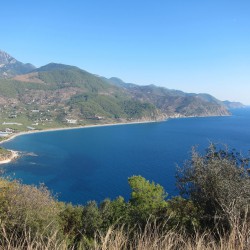 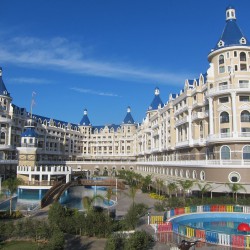 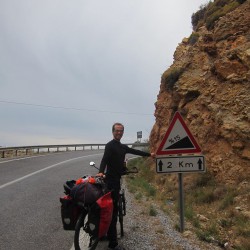 Coming from Iran, we were missing the hospitality of the people there. Not to say Turkish people are unfriendly, but invitations to homes didn’t happen and requests to sleep in a mosque or prayer room were always rejected. The language barrier was also one of the biggest yet, as only very few people spoke very broken English or German.

A surprise for us then when on one of our last nights, as we were camping close to a mosque, we heard the words that were so familiar in Iran: “It’s too cold to sleep here, come to my house.” The same happened the following night. It was as if Turkey wanted to redeem itself and show us how amazingly hospitable its people can be, too. 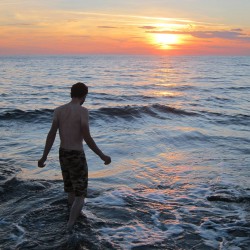 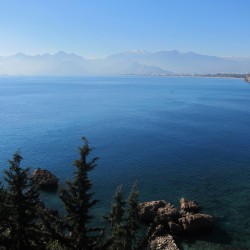 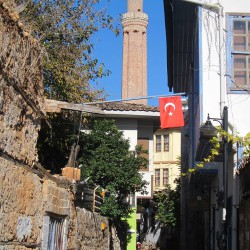 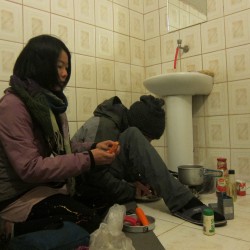 Cooking in a toilet

Without further issues we made it into the city of Marmaris, which was monumental for us as not only the last city in Turkey, but also the end of Asia. Except one short hop by flight over Turkmenistan, I came all the way here from Hong Kong. Europe was next, as we would catch a ferry to Rhodes, Greece from here. A few days rest at our couchsurfing host Ali’s place, and we said goodbye to Asia.

I’ve been to Antalya and Istanbul before, but Turkey is so much more than that. It really has so much to see, do and explore, it’s a treasure. And cycling, just like in other countries, is the way. I wish we wouldn’t be chasing visa deadlines or arriving winters – It’s a massive country and even 90 days is not long enough.

Many people don’t want to travel to Turkey nowadays, mostly because of two reasons, one being the fear of terrorism: This is so unlikely to affect a cyclist in the countryside, and even in a large city, the chance is much greater to be run over by a car. Banditry in the southeast is a problem though, so this area should be avoided.

The other reason tourists stay clear of Turkey nowadays is the political situation, with the government becoming more repressive and autocratic, shunning liberal values. Some don’t want to support such a government by tourism. But the ones that suffer from the lack of tourism are not the government, but the people that rely on it! These people need tourist money more than the government, so that’s why especially now more people should travel here. Please do, it’s a fantastic country.