Ever since starting this trip, connecting our home countries, cycling from Taiwan to Germany, was a huge motivation for us to continue cycling. When someone asked us, at any point in the trip, what’s our destination, the answer would be: Germany. Here we were now, and while not the end of our trip, it was definitely the end of a major stage.

Austria and a bit of Switzerland

We left Italy on a very high note, being very impressed with the cycle paths, and assumed Austria would just continue like this. But as soon as we crossed the border, we were back on cycling on the road. Not just that, in Austria they seemed to have the annoying habit of declaring the main roads through valleys as car-only territory, which meant we had to take more hilly side roads and even dip into Switzerland for a few kilometers!

Nevertheless, the Inn valley that we were now cycling through was spectacular. The river dug out a deep canyon between the highest Alps peaks and the beautiful Tyrolean architecture continued. It got more touristy as well, many ski resorts were still open, so the roads were accordingly busy. 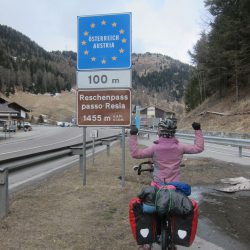 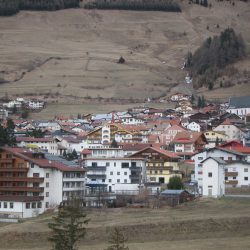 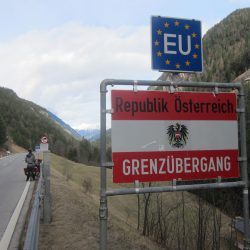 Crossing into Austria a second time 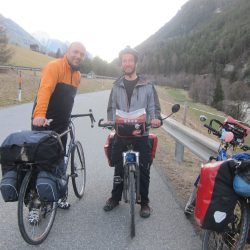 As we left the Inn and went up towards the Fernpass, we eventually found a bicycle trail again… only for it to become increasingly snowy the further we went up! The Alps really divide the climate, the nice 23°C of Italy quickly becoming a distant memory. Back on the busy road we went, at least it went gently up the pass in switchbacks.

Yuily was really impressed by the view of a mountain on the downhill, which I could confidently tell her was called Zugspitze, Germany’s highest mountain. After one year of cycling, we were now close enough to Germany that we could see it. I guessed it would be an emotional border crossing for me the next day. 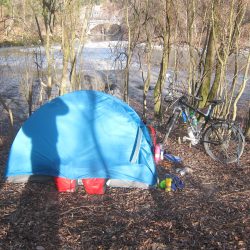 Camping on the Inn 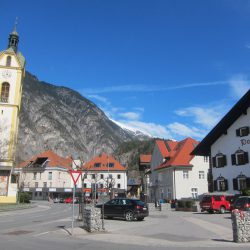 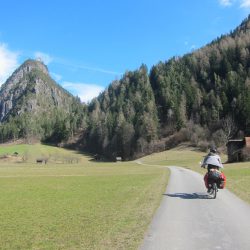 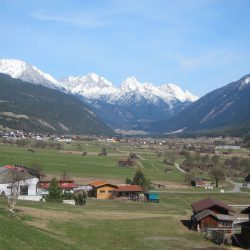 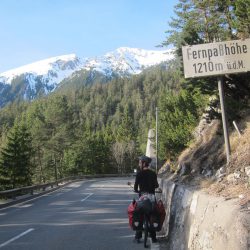 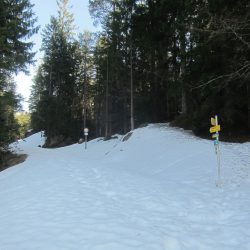 The cycle trail full of snow 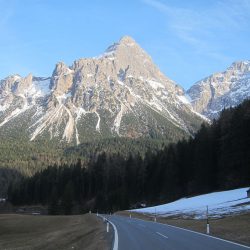 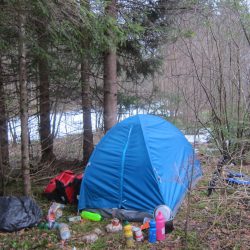 Camping between some leftover snow, the next morning was damp, foggy and cold. It seemed like we got the German weather treatment! Luckily a host across the border accepted our request, so we would have a dry place that night.

And after crossing the town of Reutte, there it was. A simple, blue EU sign marking the end of Austria and the start of Germany. I was quite emotional, Yuily as well I think, as we took pictures in front of the sign. I’ve cycled over one year now, but only now I could know what cycle touring in my own country would be like.

The difference between Austria and Germany is quite abrupt and easy to see as a natural border. The majestic mountains of the Alps end and instantly open up to the rolling green hills of southern Germany. And hills they were. Roads didn’t follow valleys anymore, making us cycle up and down a lot.

Yuily immediately remembered one thing from Germany that would become what she called her “business”: Recycling. She scanned the roadside for any bottles and cans, as each got her up to EUR0.25 refund in a supermarket. It would be a steady source of income for her. In supermarkets, we also found out that Germany is by a good margin cheaper than most of Europe. We Germans have a reputation as penny-pincers, which is reflected in low supermarket prices.

We spent a day resting up the exhaustion from the Alps with a kind warmshowers host in Bodelsberg, near Kempten, which luckily was a very rainy and cold day. We’ve heard multiple accounts of how well warmshowers works in Germany, but in the following days we didn’t even use it much, because this was my home country. I had friends. 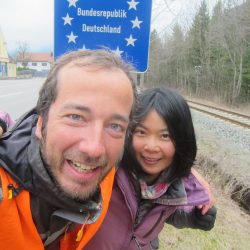 Welcome back to Germany! 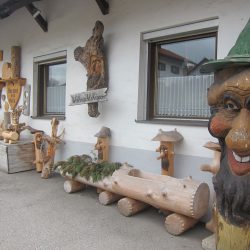 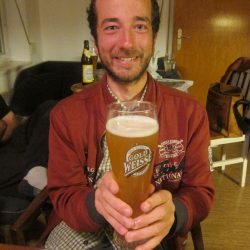 My first German beer since a while 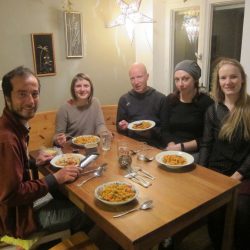 Two days cycling further north, thankfully mostly downhill and flat along the Iller river, saw us get to Ulm and my friend Tanja. She happily let us crash on her couch, listening to stories and watching videos about our trip.

The next few days saw us going up and down through the usual hilly landscape. It pains me to say this, but in terms of nature, Germany was the most boring country of our trip. There was very little of interest to take pictures and videos of, those green hills and neatly arranged patches of forest could be really anywhere in the south of the country. These forest patches were great for us to camp in though. 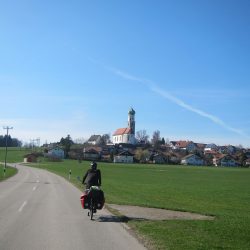 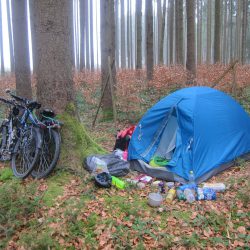 Neat forests to camp in 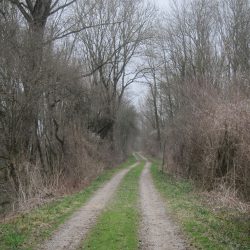 Cycle track near the Iller river 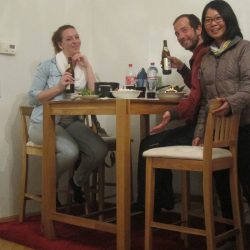 I had an interesting time with the language. I spent over two years now in countries where I couldn’t read or understand the language, but now I could talk to and understand everyone. It was a bizarre feeling, but also a very welcome one. Curious farmers and fellow cyclists were no longer behind a language barrier, which was wonderful.

We made our way to the city of Mannheim, where Ingo, another friend, was able to host us. It was also just 220 km away from my hometown of Schweich, which meant we were in the last stages, merely three days away. Luckily, the weather also played along, as it was ridiculously warm and sunny for March. 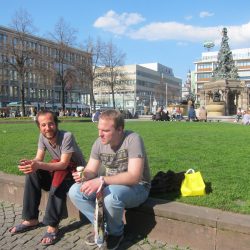 Catching up with Ingo 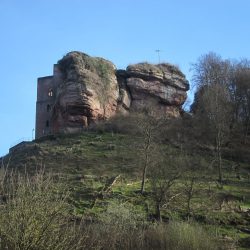 A rare change in landscape 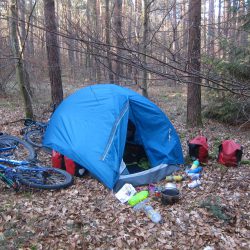 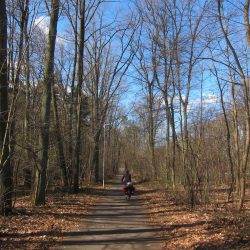 Some more unimpressive hills and forests continued in these three days, but as we just had 20 km left to go, we went on a long downhill in an impressive valley that was very different and impressive. I knew it of course, this was the Moselle river, a place I lived at for most of my life. It took us 10 days of cycling through the whole country, but those 10 days also made me realize that I grew up in one of the most beautiful parts of Germany.

In the last bits I started to recognize cycling paths that I’ve been on before and saw the bridge leading to Schweich, where I lived before I started traveling, and where my mother still lives now. It was quite emotional. I couldn’t really have said I cycled all the way. We took too many buses and trains for that, and even one flight. But at least since Mersin in Turkey, we didn’t take any other transport than ferries. Which is quite an achievement I would say.

My mother welcomed us with open arms. I messaged her with our approximate arrival time, and she prepared soup for us, which Yuily requested months in advance. We were overjoyed with the feeling of having made it, and even more looking forward to a big rest. 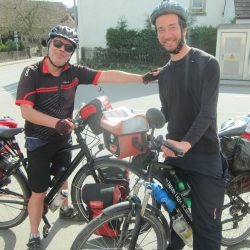 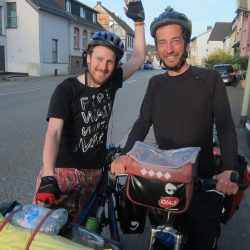 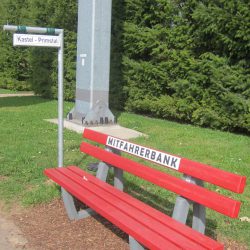 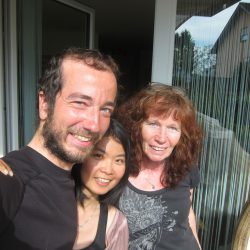 I should explain that this is not the end of our trip: It’s not called “unlimited” for nothing! Yuily would be allowed to stay in the Schengen Area until the beginning of June. The nearest country not part of the Schengen Area was the UK, which meant we would have time to stay here until late May. But for now, we would get married… more in the next post.