The largest island of Europe, always a bit different. Our choice to cycle here was without much alternatives due to the Schengen-Area visa requirements. But we were still immensely looking forward to it: A language that we both could communicate in and very pretty scenery in Scotland.

It was pretty late already as the boat docked in Harwich, almost 8 pm in a new time zone. Immigration procedures went smooth and while we waited I changed my mirror to the other side of the handlebar to remind myself to cycle on the left from now on. It didn’t help much, as we found a cycle trail, on which I just kept on the right before some cyclists coming the other way made me realize my mistake.

I instantly missed the Dutch cycling paths. Back we were to cycling on the road, or simply much too narrow and bumpy cycling lanes. Nonetheless, I was quickly impressed by the routing for cyclists. Sustrans have done an amazing job stringing low-traffic roads and bridleways together into routes for long-distance cyclists like us. We picked up route 51 straight from the port and could follow it much of the way.

It was fantastic to be able to speak to everyone for a change. We could explain our tour to curious people, ask for water without much of an issue and in one case also call the number on a tag of a dog that ran off with us to find the owner. Supermarket labels were no mystery anymore, and we really enjoyed those supermarkets for their low prices as well! The deli section of Tesco became one of our favourites for the tasty chicken, quick protein for us cyclists.

We took our time to reach London (also because we couldn’t find hosts any earlier). Going through the suburbs of this metropolis was a bit crazy – gone were the patient and understanding drivers of the rest of Europe, it was a mad free-for-all. The cycling lane was a parking lot. It got better the closer we got to the center, and the last few kilometers were quiet enough through parks. 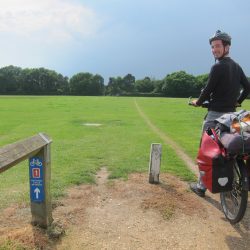 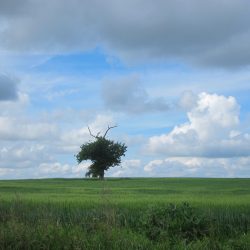 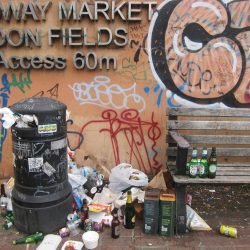 London after a weekend 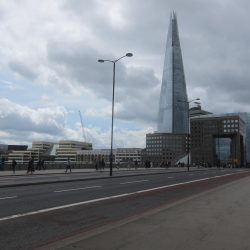 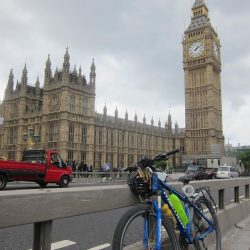 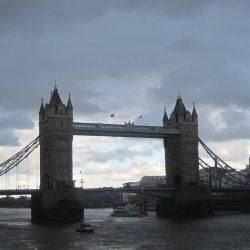 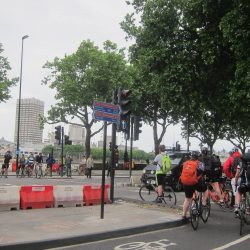 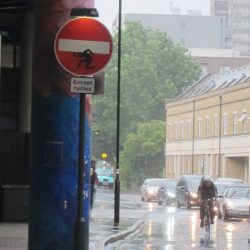 The city was shook by yet another terrorist attack just before we arrived, and we could see the fallout. London bridge was half closed and on Westminster bridge, barriers were put up to make it impossible to run over pedestrians. Strangely, we didn’t feel very anxious about it all. I guess when we are in almost daily danger of getting run over, the astronomically low chance of getting killed in a terrorist attack doesn’t incite as much fear as the very real chance of a truck driver falling asleep and crushing us cyclists beneath his wheels while on the road.

So, in that sense, we did enjoy all the tourist stuff in London. It is a city full of history and iconic landmarks, which easily filled our two days of sightseeing. Museums were generally free, which we did enjoy during rainy times.

Leaving London, we were able to follow a canal straight from our hosts home all the way out of the suburbs, so none of the traffic bothered us. We made our way to Cambridge, as someone called Simon owed us some hospitality. I hosted him through Couchsurfing back in 2013 in New Zealand, and later in 2015 he stayed a couple of nights with Yuily and me in Taiwan, too. So of course he couldn’t decline us staying a few nights with him in Cambridge now.

It was good fun as we enjoyed hanging around with him and his housemates and exploring the city famous for its old universities. Simon kept mentioning the great weather, how nice it is. We were confused as it was just an average sunny day, but soon we would realize what he meant. It’s no big mystery: Great Britain is well known for notorious rains. 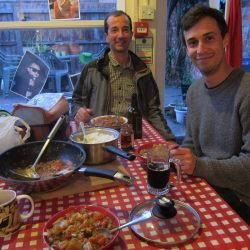 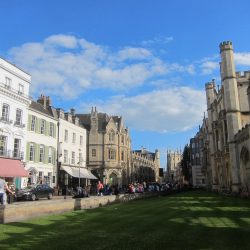 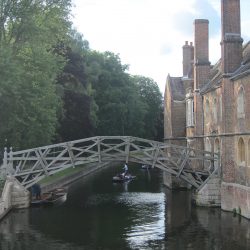 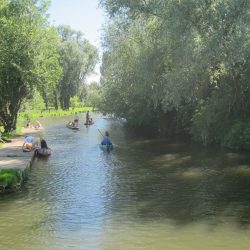 We stretched our welcome to three nights, but then it was time to leave. We didn’t really want to though. Travel fatigue had set in – we had no motivation to go out and cycle and do things, but rather just wanted to rest and relax, recharge our batteries from the past weeks of constant action. We did this in the past, but this time it proved difficult. Where could we stay?

In the end, there was no choice but to go on cycling. If there was one thing I still enjoyed immensly even in these times of travel fatigue, it was the interaction with hosts. So I strang together a few hosts on warmshowers, which are quite plentiful in the English countryside, keeping our distances at or below 60 km per day. Chatting to these people about our trip was fantastic and their hospitality was excellent, almost always inviting us for food and giving us a huge room to crash in. 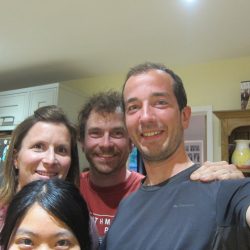 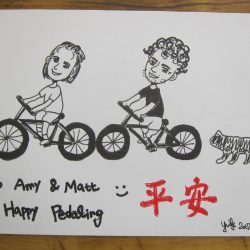 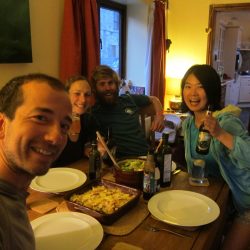 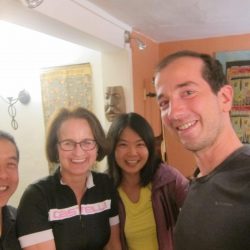 In other ways, England was testing us though. The small roads we took were notoriously hilly, being built in total disregard to the geography. Steep descents were followed by steep uphills, draining our energy. Most of these small roads had walls to the left and right as a barrier from private property, which made it impossible to see around bends or anything of the countryside in fact. I will also say that it was the most difficult country for wild camping, mostly because 99% of the countryside was private property fenced off by walls and closed gates. When we did find a patch of forest, it was covered waist high in nettles. So in many cases we had no choice but to open an unlocked gate and just put our tent into someones field, risking to be found.

The Peak District was the first one. We were lucky to find a host right in the middle of the park, who were fantastic: Peter and Alice cycled from England to New Zealand a few years ago, much of it on the same route we took through Central Asia, so we had many stories to share. Straight from their house we were able to hike a fantastic trail for one day, and they took us by car to another amazing viewpoint and short walk on another day. My travel fatigue was well and truly beaten now. 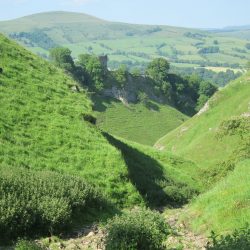 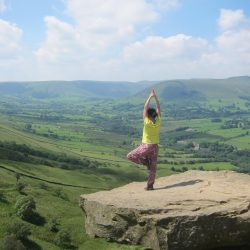 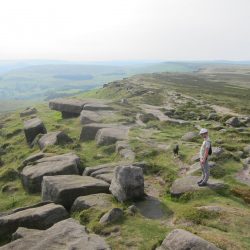 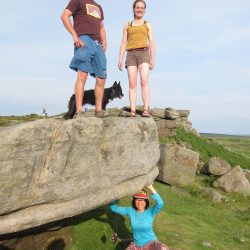 A few days of cycling north saw us arrive in the Yorkshire Dales, the next national park. Rain made this one less exciting than it should’ve been, but I was still very impressed by the deep valleys and high hills surrounding them. Of course the road builders still had no mercy, making us climb these high hills on harsh gradients! 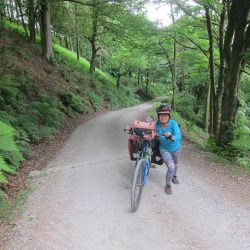 Too steep to cycle 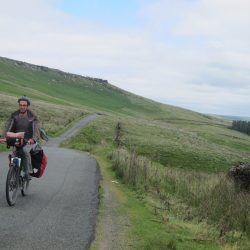 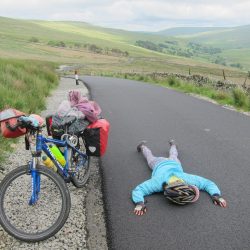 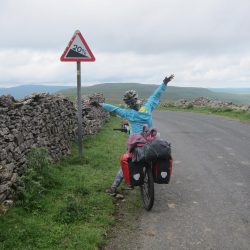 Just before the Lake District, the third national park, was the town of Kendal where we stayed with another fantastic host for five nights! We were the first warmshowers guests of Sue and Rod, a retired couple, and they treated us like family, not hesitating to tell us we could stay another night when it didn’t stop raining. They also took us to Lake Windermere by car on one of those rainy days which we enjoyed and appreciated very much. We wouldn’t have met people like them if we weren’t on a journey like this, which is exactly the reason why I like to travel by bicycle!

We did also actually cycle through the Lake District, passing by and camping on the shore of Lake Ullswater. These were no hills around here anymore, they were proper mountains. We even attempted a short hike up one, but turned around as the top was covered in clouds. It was still all very pretty, and we knew it could only get better as Scotland was up next! 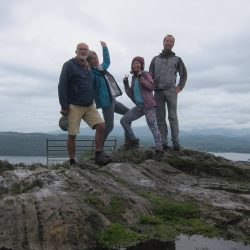 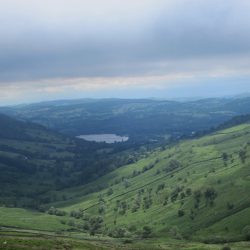 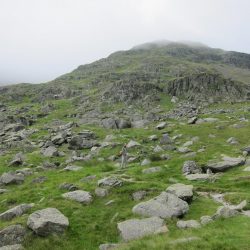 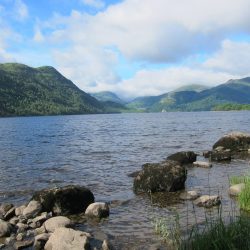 As many positive memories I have about England, those hills were not done with us yet though! Past Hadrians Wall, a wall that the Romans built to keep the Scots out of their empire, it got absolutely ridiculous. 20% grades were absolute normality and it seemed to continue like this across the border. We had enough. No more side roads. A rare decision was made to turn to a more busy and less scenic, but flatter road into Scotland and towards Glasgow.