After an amazing time in Norway, it was time to go south again, and a change of plans brought us to Finland instead of Sweden.

Amazingly there was a warmshowers host in the remote Finnish border town of Kilpisjärvi where we stayed. Elina and Gareth coincidentally had to drive 200 km south the next day with their van and offered us a lift, which we accepted. We knew that we would have to hitchhike large parts of Finland anyway in order to make it to my brother’s wedding, so this was great. Elina also recommended us to cycle south on the Swedish side of the Muonio river, which forms the border, until we hit the Gulf of Botany.

And so we left Finland just a day after we entered it, but keeping it in sight most of the time. The scenery, landscape and people were the same anyway, as this region of Sweden is home to a Finnish minority. There was not much to see of people in the first 200 km anyway, as most of the time we were just in a wild forest. It was very inspiring to me as I felt in awe of the vastness of it all and felt complete with a few sightings of reindeer. These very beautiful animals were not shy at all and just looked at us curiously. 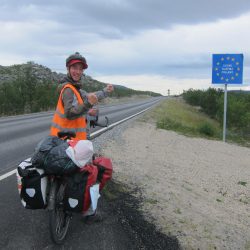 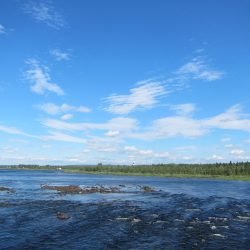 The Muonio River on the Border 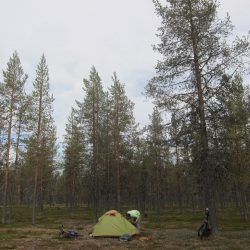 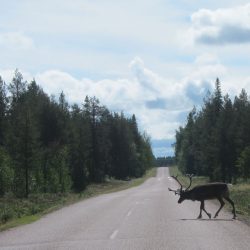 Things got more boring as we slowly left the Arctic Circle. The population increased and with it came more cultivation and plantation of the land, so the one attractive thing about this region was gone. Still, as we reached Tornio, we were incredibly happy to see a familiar supermarket: Lidl! There are none of them in Norway, but here in Finland we finally were able to afford most groceries again and shopped gleefully for an hour. In the more populated parts it became obvious though that Finland seems to have a fantastic cycling infrastructure. Many roads in towns have a purpose-built cycling track next to them and many intersections were utilizing underpasses so we never had to interact with traffic much.

I have to mention the temperatures here. Europe in general had been experiencing a heatwave this summer, and even the far north was not spared. Since leaving the Arctic Circle, daytime highs were frequently over 30°C and, due to the short nights, nighttime was pretty much always over 20°C. We sweated buckets and had to leave away the tent flysheet on many nights, lying half naked on the mats in an effort to cool down. Crazy, this is not what I imagined of Northern Finland.

After cycling through Kemi, we reached a good spot to continue hitchhiking. A yellow delivery van eventually stopped and two guys agreed to take us to Oulu. They were Afghans, and were very impressed with the few Farsi words I remembered, as they have lived most of their youth in Iran. They came to Sweden and Finland respectively as refugees a while back and were now working to deliver bread between Haparanda and Oulu, and just two months away from becoming citizens. After camping outside of Oulu, we attempted to hitchhike further, and this time got taken almost all the way to Turku by a Moroccan-Finnish man who just bought a small truck and was driving it back home to Southern Finland. We had a great time talking about his and our lives and it really makes me happy to see these successful immigration stories that you never hear about in the news. 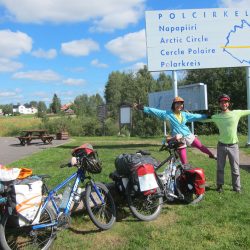 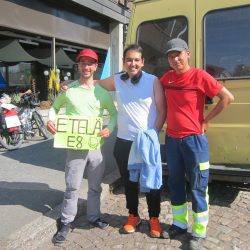 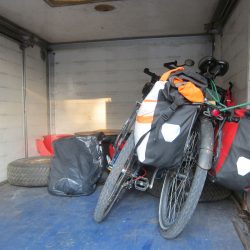 In the truck of… 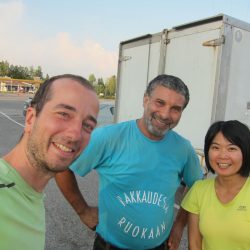 We surprised my friend Jani a bit then with a message that we would be coming tonight, and cycled the remaining 40 km to his place. It was great to see him again and we looked forward to a week of relaxation and boat trips. The heatwave continued of course, and much of the time in his place we were a sweaty mess, so getting out on the boat with his father was absolutely perfect, as we navigated through different small islands, anchoring on some of them, having frequent swims and barbecues in the evening. Our original plan would’ve been to leave shortly after that, but Jani convinced us to stay another few days for an upcoming ice hockey game. It was fun to watch, but after that we definitely needed to head for the ferry to Sweden: We still had 700 km to cycle there in 10 days! 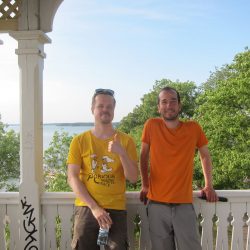 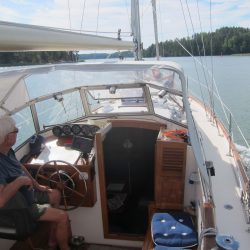 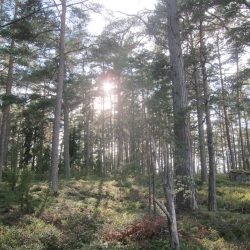 Forest on an island 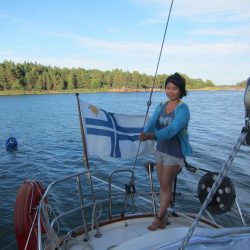 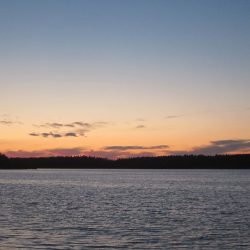 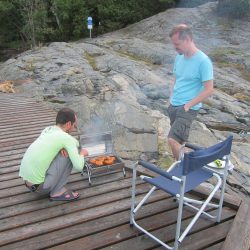 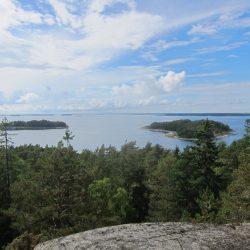 View from an island 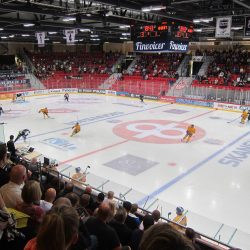 We had a very scenic crossing of the Gulf of Botany on the Viking Line ferry, which was similar to a small cruise ship. After a night with a warmshowers host then, the “race through Sweden” started from Stockholm, where we barely had any time for sightseeing, and our goal was the southern port of Trelleborg. For me it felt like we were back to the days where we rushed through countries because of visa deadlines and Yuily cursed my brother a lot for getting married this summer. But we got the work done and cycled most of the distance through headwinds on local roads paralleling the E4 expressway. A bit of a shame since we missed much of the country’s attractions and really enjoyed the excellent cycling paths, but after all we didn’t regret resting so long back in Turku. What we treated ourselves to two times were dishes of meatballs in IKEA, going for as cheap as EUR2.80. 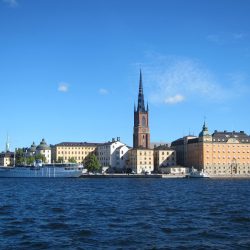 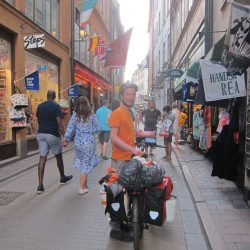 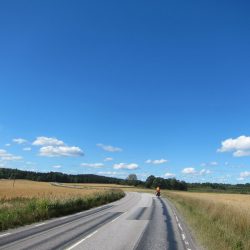 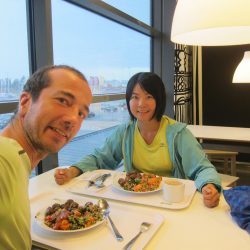 It was quite ok after all and we even managed to squeeze in another rest day when it was raining and relaxed half a day in Trelleborg before boarding the ferry in the night. It was cheap at EUR17 and didn’t require us to book a cabin, since this one catered much more to truck drivers and we squeezed into the small common area to roll out our sleeping bags. After a short sleep we were already in Rostock and with that, back in Germany. From the port, we cycled 15 km to the train station and proceeded to a long train journey home, arriving just before midnight. Trains in Germany are normally quite expensive, but this cost us just EUR32 per person and bicycle, since we used Quer-Durchs-Land-tickets. The downside was that we could only use local trains, which meant we had to change trains 6 times.

Working for a living

My brother had a very fun wedding, after which we faced the realities of life. We would like to continue our journey, but after more than two years on the road, our savings have become thinner. But in this way, my brother’s wedding was an opportunity: Harvest was starting, and the vineyards had an exceptionally productive season because of the hot summer. So I proceeded to call wine farmers for work. It took a few tries but eventually we managed to find two weeks of work with a farmer in nearby Luxembourg. We had a good time, although the work was very exhausting. It helped that we could camp in the farmers garage to avoid accommodation costs and they often gave us leftovers from the included lunch, so we spent very little in this time of earning money. It filled the gap that we needed in our budgets and with that our plans for the next adventure would become a reality. 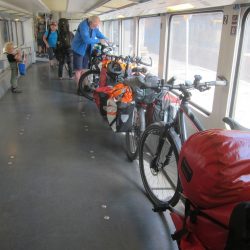 Bikes in the train 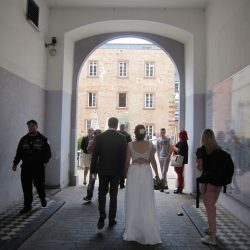 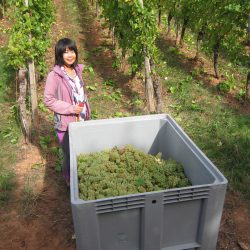 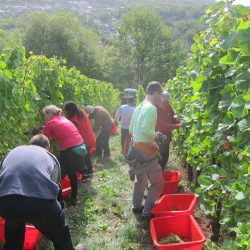 We both knew that we want to go to Africa next. But due to several reasons it’s not so easy to plan a bicycle tour there. Firstly, the only feasible routes to cross the Sahara seem to be through Morocco and Mauritania in the west, or Egypt and Sudan in the east. The West Africa route would be quite a challenge with many small, very poor countries and difficult and expensive visas. Not this time. East Africa came with other problems. Egypt is very afraid to let cycle tourists roam alone and mandates military escorts and expensive hotels in many areas. Sudan, although a country with very hospitable people, is scorching hot even in winter. And next would be Ethiopia, which was, as I heard it from every cyclist who has been there, no exceptions, pure hell for cycling. People there apparently taunt, shout and beg endlessly and aggressively, children and teenagers throw rocks, hit cyclists with sticks, spit at them and try to punch or slap them. No one really knows why, but it made me sure that I don’t want to set a foot into that country. A shame, since it also seems to have some of the nicest scenery and best food in Africa.

Another consideration was that it’s currently impossible to get from Europe to Egypt without flying. Ferries from Greece have been cancelled and the civil wars in Libya, Syria and Iraq block any overland routes. So, since we would have to fly anyway, it made sense to look for a flight to Kenya. From there on, going southwards seemed to be relatively unproblematic. Initially, I found some cheap flights from Madrid to Nairobi, Kenya’s capital, with Royal Air Maroc, which would also give us a chance to explore more of Southern Europe. But their fees for bicycles in the small print were between 200 and 300 Euro, unreasonably high. Upon checking flights to Kenya’s second city, Mombasa, I found that the low cost airline TUIfly has a flight there from Brussels. It would mean that we don’t get to cycle in Spain yet, but for 220 Euro for the flight including the bikes, we couldn’t pass up on this opportunity.

So, on November 23, we fly to Mombasa, Kenya, and try to go to South Africa. I love it when a plan comes together and just like with our Northern Europe tour, we look forward to this Africa adventure!